Posted at 23:13h in samfrancis by samfrancis 0 Comments
0 Likes
Share

This exhibition includes a variety of limited edition signed and numbered prints, including color trials, cancellation proofs, and hand-colored uniquely-altered variants. These prints provide a deeper understanding and insight into Francis’s creative process in the development of these compositions. Francis explored a multitude of techniques and processes within his oeuvre, including hundreds of limited edition prints and monotypes. He was fascinated with printmaking and developed the Litho Shop, Inc. as his own lithography and etching studio in Santa Monica where he worked primarily with master printers George Page and Jacob Samuel. 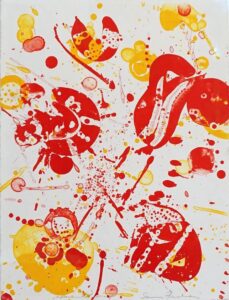 For artists like Francis (as well as Jasper Johns, David Hockney, and Robert Motherwell, to name a few) the act of printmaking, from the BAT (or Right to Print) versions to the final cancellation proofs, pushed the limits of their creative endeavors where even the cancellation proofs are viewed as finalized artworks in their own right. As seen in the Robert Green Fine Arts exhibition, the cancellation proofs are as visually commanding and relevant to the final editioned versions. Alice Desmond notes in “Never to be Repeated: Cancellation Proofs in the Kenneth Tyler Collection,” for UNLIKELY, the Journal for Creative Arts (2017-2018), that “cancellation proofs should be viewed as part of a creative process. They should not only be considered within the narrow scope of their practical function as this overlooks the visual qualities of the objects themselves.”

Rare and Unique Prints from the Sam Francis Foundation

The Robert Green Fine Arts gallery is open 11am-5pm, Friday-Sunday and by appointment.