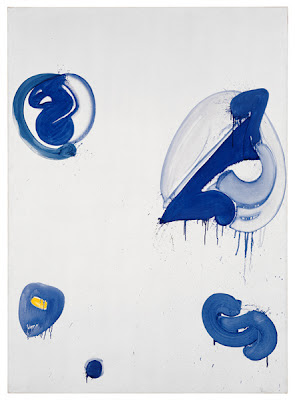 Posted at 14:05h in Uncategorized by samfrancis 0 Comments
0 Likes
Share

Sam Francis, Blue
Balls V,
1962, 72 x 52 inches, oil on canvas
Collection: The Metropolitan Museum
of Art, Gift of the Sam Francis Foundation
Los Angeles, July 20, 2012:  The Sam Francis Foundation is pleased to announce that it has donated Blue Balls V, a1962 oil on canvas, to New York’s Metropolitan Museum of Art. The painting is the first Sam Francis oil to join the Met’s collection. The painting joins two other works by Francis — 1957 watercolor, Structure II, and an untitled monotype from 1977 — already in the Metropolitan’s collection.
The 72 x 52 inch painting is from a series that Francis executed
between 1960 and 1963 while convalescing after a bout of renal tuberculosis.
During his extended hospitalization Francis endured kidney problems and
swelling in one of his testicles, to which the title “Blue Balls” makes a sardonic
reference. Painted on a pure white ground in sweeping strokes of blue – a
favored color of the artist – Blue Balls
V is both a biomorphic abstraction that suggests cellular presences, and a
confident demonstration of the artist’s bravura brushwork.
Blue Balls V is one of
16 known oil on canvas works from the “Blue Balls” series.  “Blue Balls VIII” is in the permanent collection
of the Museum of Contemporary Art Los Angeles. 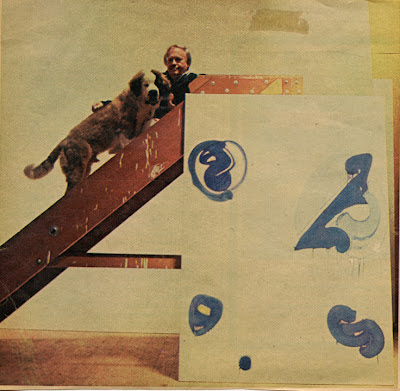 Sam Francis in his Santa Monica Studio in 1965 with Blue
Balls V
In 1991, when New York’s Gagosian Gallery held a show of Francis’
“Blue Balls” paintings, Roberta Smith of the New York Times characterized the
works in the exhibition as “elegantly explosive.” Commenting on the Blue Balls
series as a whole, Smith had strong praise to offer:  “They show a young artist at the height of
his powers, mark a turning point in American painting with unusual complexity,
and in both ways may unsettle prevailing opinion about their creator’s
achievement. “
Art historian William Agee, in his essay for the Sam Francis Catalogue Raisonné of Canvas and Panel Paintings, 1946 – 1994, notes that
“…these paintings (the “Blue Balls” series) participate in the
heightened openness and clarity of the art of the 1960s; a development, it
should be remembered, that Francis himself had helped to define and
effect.”
Marla Prather, the Met’s Curator
for Modern and Contemporary Art, feels that Blue
Balls V fills a void in the Museum’s collection:  “Given the Metropolitan’s great strength in
American Abstract Expressionist and Color Field painting it is surprising that
it was not until 2011 that the Museum acquired its first painting by Sam
Francis. We are pleased to represent the artist with a strikingly vibrant work
from the Blue Ball series. The
restrained composition of Blue Balls V
has a remarkably contemporary presence and makes an ideal transition from the
Museum’s collection of gestural painting from the 1950s to hard-edge painting
of 1960s.“
Debra Burchett-Lere, Acting
President and Director of the Sam Francis Foundation is pleased to be working
on behalf of the board of directors in realizing a gifting program, as outlined
by Francis Foundation Board members, Nancy Mozur and Donna Stein. “Working with
Marla Prather and the staff at the Metropolitan on this donation has been such
a positive experience,” states Burchett-Lere. “We are honored with the
Metropolitan’s enthusiastic acquisition of the Sam Francis as it joins a good
home with the other prominent postwar holdings in the museum’s collection.”
High resolution images of Blue
Balls V are available for Press use on request.
About the Sam Francis Foundation:
The mission of
The Sam Francis Foundation is to research, document, protect and perpetuate the
creative legacy of the artist Sam Francis (1923–1994).
The goal of the foundation is to promote awareness of and knowledge about the
art of Sam Francis to the public through education and information. Ongoing projects
include donations of Sam Francis prints, works on paper, canvas paintings, and
accompanying educational materials such as films, catalogues, and posters to
charitable institutions across the United States. Institutions are selected on
the basis of their scholarly approach to exhibitions and for their commitment
to publications that provide regular public access to artists’ works.
For more
information, please contact:
John Seed, Media Relations Consultant: samfranciscr@gmail.com
Communications Office, The Metropolitan Museum of Art: communications@metmuseum.org