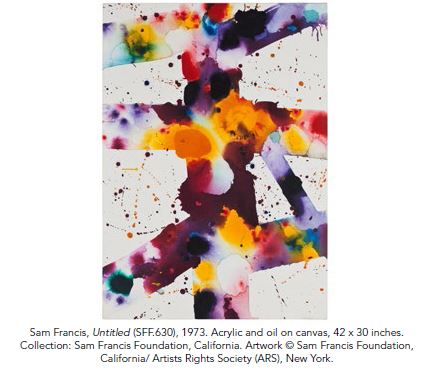 Posted at 00:09h in Uncategorized by samfrancis 0 Comments
0 Likes
Share

Pasadena, CA – The Pasadena Museum of California Art (PMCA), is proud to present Sam Francis: Five Decades of Abstract Expressionism from California Collections, the first major museum exhibition of Francis’s work in over a decade. Known as one of the twentieth century’s most influential painters of light and color, Sam Francis maintained studios in New York, France, Switzerland, and Japan, but continually returned to his native California, finishing his last series of paintings in Santa Monica just before his death in November 1994. The exhibition brings together Francis’s paintings and unique works on paper from extraordinary public and private California collections, including many paintings on view to the public for the first time.
Born in June 1923 in San Mateo, near San Francisco, Francis started his career in California. He moved to France in 1950, and by 1956 he was described by Time magazine as “the hottest American painter in Paris these days,” signaling his arrival as one of the first post-World War II American painters to develop a truly international reputation. Having stated, “Painting is about the beauty of space and the power of containment,” Francis spent his career investigating that belief through his use of color, understanding of light, and lyrical rhythmic compositions. His works not only contributed to the range of styles and influences in the world of painting, he also referenced and responded to the California Bay Area Modernists with his early paintings from the 1940s to early 1950s; French Impressionism, Abstract Expressionism, and Chinese and Japanese scroll paintings with his works from the 1950s; and Color Field Painting with paintings in the 1960s. Although his oeuvre can be loosely associated within these broad artistic styles, his life and art were complex and varied, defying any specific characterization or interpretation. 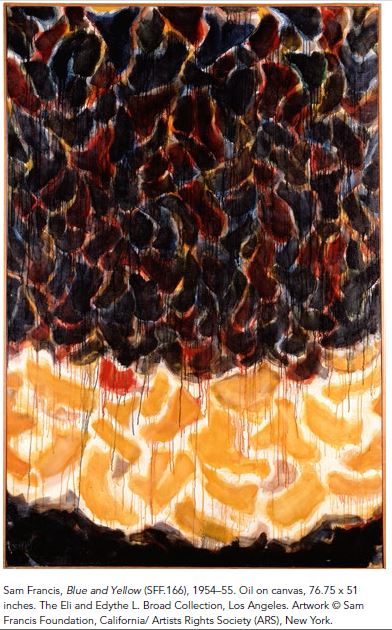 Spanning fifty years, the works included in the exhibition explore Francis’s use of saturated tones (blues, reds, or yellows) and pigments ranging in hue from light to dark representing a kind of duality in the universe both understood and imagined. The exhibition includes some of his smallest works, which measure three by two inches, as well as monumental murals that are over ten feet long, each with a distinctive power and presence regardless of size or material. This exhibition includes some of the artist’s loosely defined series including the “Cellular” paintings from the 1950s, the “Blue Balls” and “Edge” paintings of the 1960s, and the “Fresh Air” and “Grids” from the 1970s. Other works include mandalas, late self-portraits, and Francis’s alchemically inspired works of the 1980s and early 1990s.

An illustrated catalogue accompanies the exhibition featuring a recent dialogue on Francis and his work between the exhibition’s co-curators: art historian Peter Selz, Ph.D., former curator at the Museum of Modern Art, New York and author of the first monograph on the artist, and Debra Burchett-Lere, the executive director and interim president of the Sam Francis Foundation. Burchett-Lere is also the author of the recently published Sam Francis Catalogue Raisonné of Canvas and Panel Paintings: 1946–1994, published by the University of California Press.
Sam Francis: Five Decades of Abstract Expressionism from California Collections is organized by the Sam Francis Foundation in collaboration with the Pasadena Museum of California Art and the Crocker Art Museum. The exhibition will travel to the Crocker Art Museum in Sacramento, CA, where it will be on view from January 26 – April 20, 2014.

Mission
The mission of the Pasadena Museum of California Art (PMCA) is to present the breadth of California art and design through exhibitions that explore the cultural dynamics and influences that are unique to California.

Admission
$7 for adults, $5 for seniors and students; free for PMCA members and children under 12; free the first Friday of the month (all day); free the third Thursday of the month (5–8pm). Access for people with disabilities is provided.

DOCENT TOURS AND GROUP RATES
At this time, the museum does not offer regularly scheduled docent tours. However, docent tours are available Wednesday–Friday to private groups for a fee of $75. A non-refundable deposit of $40 is due two weeks prior to the scheduled date.

Docent-led group tours and self-guided tours for K-12 students are offered for free. We regret that we are unable to accommodate tours for groups larger than 35 people. Before requesting a tour, please check the exhibition calendar to see which exhibitions will be available during your visit.

A discounted group rate of $3 per person is available for groups of 20 or more (K-12 student groups are free). Please call to notify us at least one week in advance for these special admission rates.

For any questions or to make reservations for a tour or group rate, please call Alexis Kaneshiro, 626.568.3665 x13 or email
akaneshiro@pmcaonline.org