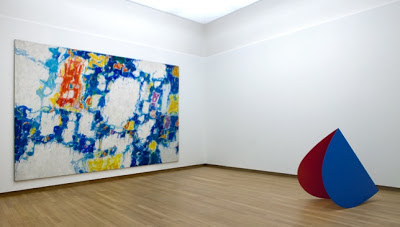 Posted at 16:37h in Uncategorized by samfrancis 0 Comments
0 Likes
Share

“Basel Mural II” by Sam Francis will be on view at the Stedelijk Museum in Amsterdam through September 15, 2013, sharing a gallery with Ellworth Kelly’s 1963 freestanding aluminum sculpture “Blue Red Rocker.”  The Stedelijk Museum re-opened in September of 2012 — under the direction of former MOCA curator Anne Goldstein — after being closed for eight years of renovation and expansion.  For that reason, Basel Mural II has not been on public display for over a decade.
The mural on display in Amsterdam was originally part of a trio that has been separated since 1964, when they last hung in the Basel Kunsthalle. In 1967 “Basel Mural I” was donated by Francis to the Pasadena Art Museum, which later became the Norton Simon Museum. It now shares a room at the Simon with two vertical fragments of “Basel Mural III” at the Simon.

In a blog written about “Basel Mural I” for the Huffington Post, John Seed noted:

“Gorgeous, seemingly alive, and resolutely abstract, “Basel Mural I,” and the two other murals that once accompanied it, have their aesthetic roots in the vast, horizonless Monet “Nymphéas” installed on the lower floor of the Musée de l’Orangerie in Paris.” 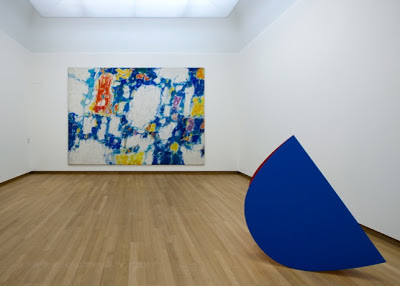