Peter Selz on Sam Francis: “He is the most important California artist ever.” 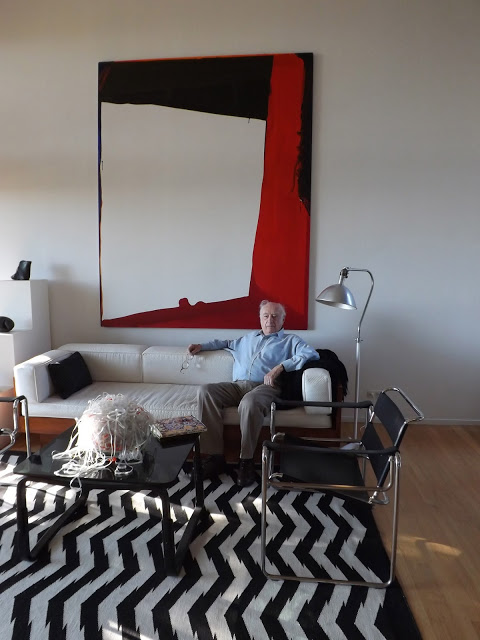 31 Jul Peter Selz on Sam Francis: “He is the most important California artist ever.”

Posted at 18:13h in Uncategorized by samfrancis 0 Comments
0 Likes
Share

Art historian Peter Selz, now 94, was a close friend of Sam Francis, and remains an avid supporter of the artist’s legacy. In a recent conversation with Debra Burchett-Lere, the Director of the Sam Francis Foundation, Selz said of Francis: “He is the most important California artist ever.”

It is a strong statement — especially considering the acclaim that Richard Diebenkorn continues to receive — but Selz asserts that Francis’ international reputation needs to be considered.

“Sam
is probably the most international of all the American artists of his time. I
mean Richard Diebenkorn is a well-known Californian who is collected
internationally, and there are many others, but Sam goes far beyond that.”

The dialogue with Burchett-Lere, which will be included in the opening of the catalog for the upcoming exhibition “Sam Francis: Five Decades of Abstract Expressionism from California Collections,” is a wide-ranging conversation in which Selz offers a number of revelations and recollections.

In one anecdote Selz recounts his intitial reaction to Sam’s “Basel Murals:”

“I remember when I saw the Basel Mural Triptych in
the Documenta III exhibition, I had been in Europe quite a long time and
had seen some works by Sam here and there. But when I saw that triptych I was
really flabbergasted—I mean the light, the air, the color. There simply was
nobody who had that sense of color that Sam had. Nobody.

Selz also states that during his tenure as a curator of painting and sculpture at the Museum of Modern Art in New York he had planned to give Francis a one-man exhibition, but that the show never happened due to a change in the museum’s directorship. Another interesting note: Sam Francis was the last artist to receive an honorary art degree from UC Berkeley. The degree was awarded to him after his 1968 exhibition at the Berkeley Museum.

As the dialogue between Selz and Burchett-Lere reveals, Peter Selz occupied a unique position in Sam’s life, and Selz still misses the connection:

I miss a really close personal friend, a person whom I could talk to about many things: my feelings, mydreams, his dreams, our thoughts…It was just a very close personal relationship between an artist and his critic. I miss him a lot.

Debra Burchett-Lere and Peter Selz will be discussing Sam Francis at a public panel at the Pasadena Museum of California Art on Sunday, August 11th at 3:PM:

Click here for more information on the Panel Discussion.