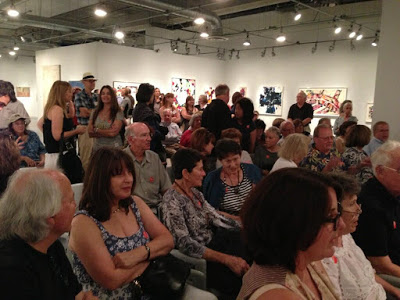 Posted at 02:35h in Uncategorized by samfrancis 0 Comments
0 Likes
Share 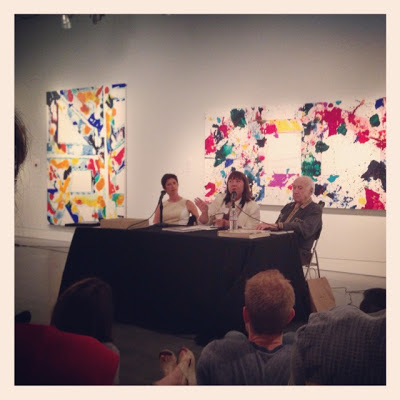 L to R: Jessica Todd Smith, Debra Burchett-Lere, Dr Peter Selz
Photo: Greg Dahl
Sam Francis: Five Decades of Abstract Expressionism from California Collections opened this past weekend with a well-attended panel discussion featuring the show’s curators Debra Burchett-Lere and Dr. Peter Selz. The show appears to be a crowd-pleaser, and is drawing rave reviews in the press.
Christopher Knight, writing for the LA Times says the show “impresses” and calls it “a satisfying and wide-ranging introduction to a marvelous artist’s work.”
Marc Haefele, a critic for Southern California Public Radio  was deeply impressed by Francis’ late works, commenting:  “…the pictures he did in his last months, with their new submarine greens and early sunrise reds, exceed in their imagination anything he’d done before. Go see them while you can.”
William Poundstone, who evaluates Francis’ historical importance in a blog posted at art info.com, says that Francis had “a near-perfect career” and observes that “Though the exhibition limits itself to public and private California collections, that’s ultimately not much of a limitation.”
Hunter Drowhojowski-Philp — whose review was broadcast by Radio Station KCRW — feels that Sam Francis transcended his personal pain and calls his triumphant career “unexpected:”
Unexpected because fellow abstract artists tended to be driven by angst and anger. Unexpected, too, because one might expect a man who had been through Francis’ personal trials to produce a sour sort of art. Instead, he painted as though blessed.
Sam Francis: Five Decades of Abstract Expressionism from California Collections
August 11, 2013–January 5, 2014
The Pasadena Museum of California Art