02 May Sam Francis: Works on Paper and Editions 1957-1994 at Leslie Sacks Contemporary

Posted at 02:40h in Uncategorized by samfrancis 0 Comments
0 Likes
Share 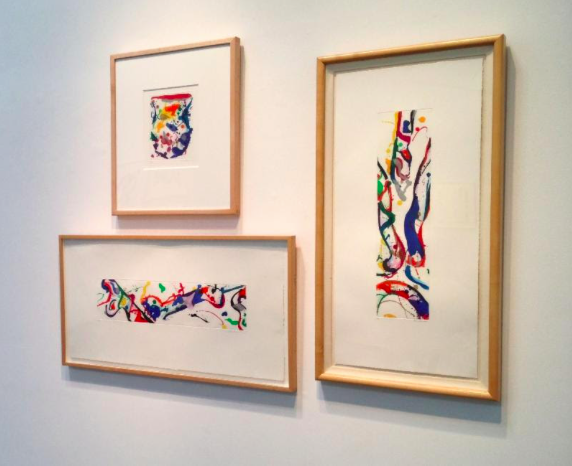 Leslie Sacks Contemporary is pleased to announce the exhibition Sam Francis: Works on Paper and Editions 1957-1994. This exhibition surveys from 1957-1994 the renowned West Coast Abstract Expressionist’s prolific legacy. In keeping with Sam Francis’ career-long exploration and interest in printmaking and paper, featured works will include watercolor and gouache works on paper, monotype and etching, aquatint and lithographic editions.
This exhibition presents classic examples of Sam Francis’ work spanning five decades. It includes a superb watercolor and gouache on paper from 1957 and a rich Edge series watercolor and gouache on paper from 1968. Early lithographs from 1964 will be on view alongside some of the artist’s finest prints: etching- aquatints in very small editions from the 1980s and 1990s.
Dripping, corpuscular shapes painted with rich color in a fluid style are the iconic elements of Sam Francis’ work, reflecting both a concern with the ceaseless instability of the world (as frequently noted in Buddhist thought), and a lifelong fascination with microbiology. Despite the apparent spontaneity of his compositions, Francis was highly methodical. In the mid 1960s he pushed all forms to the edges of his compositions (Edge paintings), leaving large empty spaces in the center in accordance with the contemplative Japanese notion of negative space. The angular geometry of the Edge series expanded in the 1970s as he returned to “all over” composition through the use of grid like forms. In 1980 Francis established the Santa Monica Litho Shop. His focus then shifted almost completely to printmaking, where he created exquisite and delicate etching-aquatints, bold lithographs, and deeply textured monotypes. During the eighties and until his death in 1994, Francis reverted to a fundamentally abstract expressionist style much like that of his mid to late 1950s work, but with an even stronger palette. Though, with his lifelong emphasis on vibrant color, Francis had very divergent concerns from the frequently dark energy of many of the abstract expressionists.
In 1952 at 29 years of age, Sam Francis was given his first solo show in Paris, France. The American painter and printmaker was further acknowledged as one of the leaders of modern American painting by his inclusion in the landmark exhibition “12 Americans” at the Museum of Modern Art in New York. This same year Time magazine pronounced him “the hottest American painter in Paris.” A native and longtime resident of California, Francis was also a citizen of the world, residing and maintaining studios for long stretches in Europe and Japan. Through his travels in Japan, Francis garnered a deeper understanding of light and air, championing compositions with open, white spaces bound by bold, expressive color. In the early 1960s, Francis returned to California, and over the next 30 years he worked in studios in Santa Barbara, Palo Alto, Venice and Santa Monica. During this time Francis was influenced by the California School, mysticism and Eastern philosophy.
Sam Francis is considered a leading painter of light and color, straddling a bridge between Abstract Expressionism and what Clement Greenberg called “Post-Painterly Abstraction”. The second-generation abstract expressionist’s oeuvre references a myriad of influences such as the New York School’s abstract expressionism (in particular Mark Rothko and Clyfford Still), Japanese landscape paintings, French impressionism and even his roots with the Bay Area figurative school. The work of Sam Francis is held in the permanent collection of every encyclopedic modern art museum in the world.
Sam Francis: Works on Paper and Editions 1957-1994 will be on view at Leslie Sacks Contemporary at the Bergamot Station Arts Complex, 2525 Michigan Avenue, B6, Santa Monica, California. Gallery hours areTuesday-Friday 10:00a-6:00p and Saturday 11:00a-6:00p. Please call 310-264-0640 or email Diana atinfo@lscontemporary.com for additional information. The gallery website is www.lesliesackscontemporary.com.