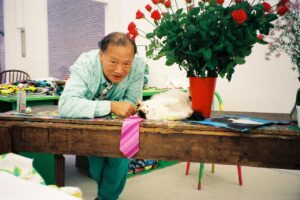 During the many hours that Debra Burchett-Lere, Executive Director of the Sam Francis Foundation, has spent studying the Sam Francis Papers she has made some discoveries. Among them is the trove of letters that artist Walasse Ting (1929–2010) sent to Sam during their long friendship. Realizing that this correspondence was special, Debra suggested to me in 2016 that I should spend some time at the Getty Research Institute (GRI) looking them over. In the spring of 2017 I did just that and was dazzled—not just by the contents of the letters—but also by the many typewritten poems, sketches, calligraphies, and Dada-esque postcards that Ting mailed to Sam over a period of more than thirty years. 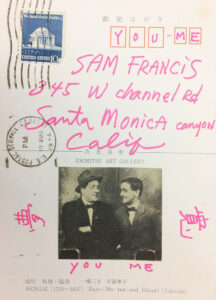 A 1974 Postcard from Walasse Ting to Sam Francis.

The article I developed after several visits to the Francis Papers, “DEAR Big SAM, The Letters of Walasse Ting to Sam Francis Tell the Story of Their Friendship Over Time,” published in the Sept/Oct 2018 issue of Arts of Asia, describes an enduring friendship anchored by a shared love of art and hedonistic pursuits. Although the two men did not meet there, their friendship had roots in Paris, where both men painted and launched their artistic careers in the 1950s. 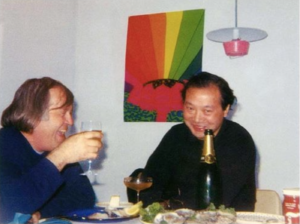 Sam came to Paris in 1950, funded by a $75 weekly GI Bill stipend that allowed him to study with Fernand Leger. Ting arrived three years later, an immigrant from China who carried no passport and had only $5 in his pocket. Two years later, when Life magazine published a photo of Sam in a feature titled “The Most Talked About Painters in the World,” Ting was living and working in a tiny studio in the “Chinese District” of Paris, sometimes eating crusts of bread retrieved from nearby gutters. Although he was noticed by French Informel artists including Pierre Alechinsky—who once watched Ting paint calligraphies on the floor of his tiny apartment—Ting sold few paintings in Paris and struggled to get by. Ting certainly knew of the famous American painter Sam Francis, but didn’t meet him until he came to New York City in 1959. 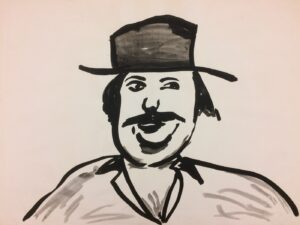 When they met, Sam and Ting found that they had friends in common from their Paris days including Pierre Alechinsky, Jean-Paul Riopelle and Karel Appel. It was likely Sam who introduced Ting to his dealer Martha Jackson, who gave Ting a solo New York show in April of 1960. The two artists were soon showing together, in Italy in 1961 and then again in 1962 at the Seattle World’s Fair. In 1962 Sam and the Swiss dealer Eberhard “Ebi” Kornfeld agreed to finance a Quixotian project Ting proposed at a Chinese restaurant: a lavish portfolio and book of 62 prints by 28 artists—coupled with 61 of his poems—to be called One Cent Life. The project had other backers, but would never have been fully realized without Sam’s deep pockets. As Ting later wrote: “Sam take his money from Swiss bank to buy 17 ton white paper white like snow.” 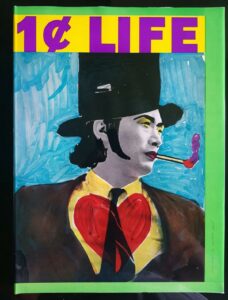 Book jacket image of “One Cent Life” with a collage print of Walasse Ting by Machteld Appel.

Sam’s patronage of One Cent Life, which helped Ting’s career bloom, cemented the men’s friendship. Over time, they would partner to produce numerous other books and print projects. But there was another mutual interest that gave them something to bond over. Sam and Ting were both avid ladies men who pursued sexual adventures with hedonistic zeal. Art was in fact a secondary interest to Ting, an erotically-obsessed Casanova who once wrote “I love girl more than any painting, Prostitute more interesting than Renoir.” Ting was in awe of Sam’s sexual magnetism and several of Ting’s letters make admiring references to Sam’s conquests. One 1965 letter—half typed and half hand-written—includes an erotic caricature and Chinese characters and a translation: “Uncle Sam had long lovesick, the Zen master tired after too much beautiful ladies.” One of charms of this letter (and of Ting’s poems ) is that it uses the Chinese Pidgin English that Ting learned on the steamer from Shanghai to Marseilles. 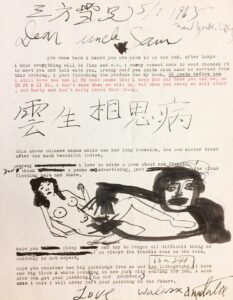 Sam and Ting’s friendship spanned years during which both men moved around quite a bit (especially Sam) so Ting’s vivid letters were a way of entertaining Sam and staying connected at a distance. They visited from time to time and showed together, along with their Paris friend Joan Mitchell, in a 1972 show called “The Fresh Air School” at the Carnegie Institute Museum of Art. Ting’s art soon moved towards representational subjects—sexy ladies, blue horses and brightly-hued parrots—but at the Carnegie he exhibited spattered abstractions that shared a certain fluidity with Sam’s work. It’s fair to say that both men explored the overlaps of Asian brush painting and Western Action Painting, influencing each other along the way. 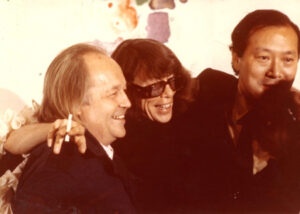 Although there are no records of any surviving collaborative paintings by Ting and Francis, the two friends apparently made some. There are photos of Ting working in one of Sam’s California studios in the late 1980s, borrowing his friend’s broad brushes and buckets of acrylic paint. “It was like two small boys painting again, like the old times,” recalls Nico Delaive, a dealer who later organized the 2006 exhibition Sam Francis and Walasse Ting: Friends at his Amsterdam gallery 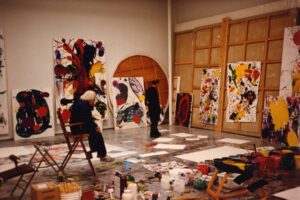 Since the publication of DEAR Big SAM…, there has been an increasing interest in Sam and Ting’s friendship and one result is a show on view through April 30, 2021 Celebrating a Friendship at Alisan Fine Art, Hong Kong. The show presents 18 works on paper and the One Cent Life portfolio along with a display of photos and memorabilia. 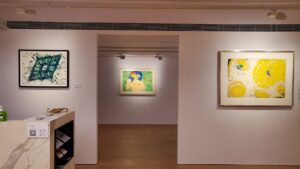 When asked to contribute a short introduction for the Alisan show’s catalog, I went back to my notes and photos from the GRI and came across a letter that Ting wrote to Francis in late 1974. It opens with these lines:

white as snow,
blue as sky,
pink as lips,
yellow as ting,
violet as sam

These simple verses offer a charming way to understand how Walasse Ting saw himself and his great friend Sam Francis. The two men were like complimentary hues of the spectrum, each part of a shared universe of color that offered infinite inspiration, sensation and joy. 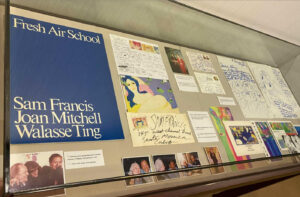