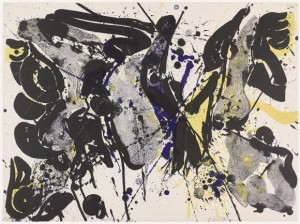 Sam Francis, For Miró I, 1963, lithograph.[/caption] An avid printmaker, Sam Francis (1923–1994) combined loose strokes and splatters to create vibrant lithographs that pop with color and pulse with energy. An injury during a World War II test flight resulted in Francis’s hospitalization for several years. It was during his recovery that he began making art. Later he would become a world traveler, visiting France, Indonesia, Japan, and Thailand, among other locales. His artistic models ranged from Abstract Expressionism to Surrealism, while literature, science, Eastern philosophy and religion, and the psychoanalytic theories of Carl Jung all played a role in his work. Some of the forms in his prints resemble biological specimens or cells dividing. These same forms also evoke traditional symbols—the life-giving sun or an imperfect circle that never reaches completion. This exhibition features more than a dozen works from Francis’s time at the Tamarind Institute, the Los Angeles workshop founded to revive the practice of lithography. By uniting master printers with painters and sculptors, Tamarind was responsible for developing lithography’s potential as an art form in the United States.